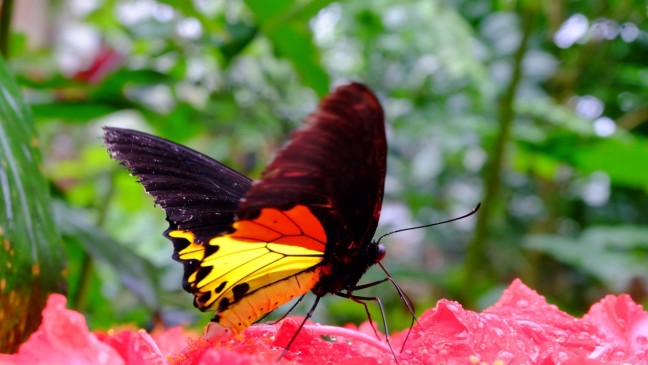 Here I explain how you can think about ecosystems and how to restore them. The case study of the Golden Birdwing Butterfly, which can be found in the urban forest patch that is Rimba Ilmu Botanic Garden located inside the University of Malaya.

Merely reintroducing a species does not produce long lasting results. Butterfly farms all over the country constantly have to restock wild caught butterflies due to captive butterflies dying and not reproducing. When an animal is placed in a system that does not meet its needs, there’s nothing much that it can do except go extinct.

The secret to the birdwings survival is the fact that it has a functioning ecosystem that produces resources can satisfy its ecological requirements.

In a butterfly farm, the basic requirements for survival are met; the temperatures are suitable and there is enough food supplied through cut flowers and fruit. The ecosystem in a butterfly farm looks like this:

To be more sustainable and reduce the cost of having to feed the birdwings, you could plant food plants for the birdwings, so they can feed on the nectar. Birdwings prefer flowers that grow on in large clusters like Saraca, Ixora and Bauhinia kockiana so they can walk along and feed. The ecosystem would look this this:

As mentioned before, once the end of the lifespan of the butterfly is reached the ecosystem collapses. This is because all butterflies require a host to develop on as a caterpillar, in this case the Birdwings are breeding on a climbing plant known as Pipevine (Aristolochia tagala). If supplied with a host plant, the butterflies can lay their eggs and reproduce and create a new generation. This ecosystem would look like this:

However, Birdwing caterpillars damage the stem once they are about to pupate into a butterfly. This behaviour is believed to increase the nutrient density of the leaves while reducing the water content. Because of that, the above ecosystem will also eventually collapse after enough caterpillars damage and kill off all their hosts.

The special thing about the Rimba Ilmu ecosystem is that it has pollinators for the Pipevine, so the Pipevine can reproduce and replace the population that is lost to caterpillars. What is the pollinator of the pipevine? Tiny flies (Drosophilla spp., Megaselia spp.), which get caught in trap chambers in the flower of the Pipevine and forced to become pollinators without any reward. So a more viable ecosystem looks like this:

Of course since the Pipevine doesn’t feed them for the service of pollination, the fruit flies require their own food source, which is often rotten fruit, decomposing materials or fungus. These decomposition systems happen when there is enough fallen fruit, mulch and rotting logs in the overall ecosystem. This is supplied by leaves, fruit and branches falling off the plants in the system (which is an important reason to always leave some decomposition around). This results in this ecosystem:

The example above is a functioning, self sustaining ecosystem. As long as it gets enough sun it can keep going without any human interference. But the most interesting thing about this ecosystem is the fact that it assembled itself. While this “let nature find a way” approach is possible, we can help it along by being aware of the different parts and the needs of each part of the system. If you want butterflies in your garden, you need to think about more than butterflies.

This article is supported by The Habitat Foundation Conservation Grant

The Urban Biodiversity Initiative (UBI) is an independent collective for urban ecology research, conservation and environmental education. We are based in Kuala Lumpur, Malaysia.

Find out more about us!

Core team
Our values
Our partners
Media and resources